The Snow White Plans is a set of experiment documents discovered in NieR Replicant. It covers the experiments that Number 6 and Number 7 underwent in the Underground Laboratory.

The Snow White plans are a series of magic experiments conducted on children in order to create the ultimate weapon. These experiments were done in the secret underground facility beneath Emil's Manor. The document states that the Manor had been specifically built to disguise the facility.

Records show that they had successfully made the ultimate weapon, experiment Number 6. However, they were unable to control her and her powerful abilities and were forced to create another experiment to petrify her and seal her in place, experiment number 7.

It is later revealed through Emil's memories that experiment Number 6 is Emil's sister, Halua, and Emil himself was number 7.

Following the recent incident with Number 6, we have decided to establish an archival room. This room will hold records on the methods used to control and/or cancel all forms of magic - including petrification and bestial transformation - as well as allow other projects to move forward. (Specifically, this should make it easier to complete a long-term storage solution for Number 6, as well as proceed with our work on Number 7.)

All employees are required to keep the courtyard entrance to this new room secure. Failure to do so is considered grounds for immediate termination. 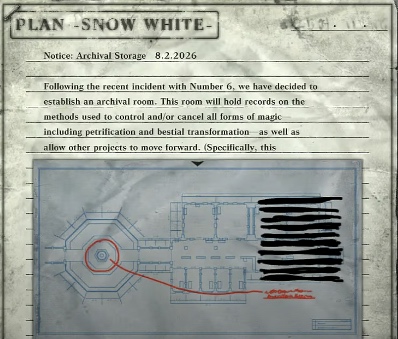 We have completed the initial research into Number 6, and are ready to initiate the startup experiment in the coming days.

As this will likely mark a great leap forward in Gestalt research, the National Weapons Research Laboratory has made the completion of the Number 6 project its top priority. Budgets for all other projects are to be frozen, effective immediately. 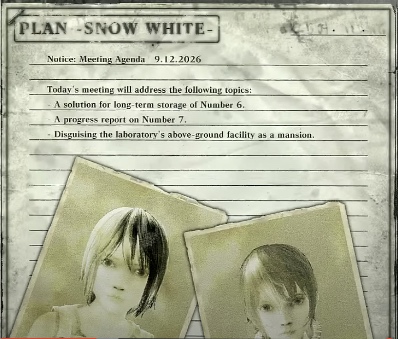 - A solution for long-term storage of Number 6.

- A progress report on Number 7.

-Disguising the laboratory's above-ground facility as a mansion. 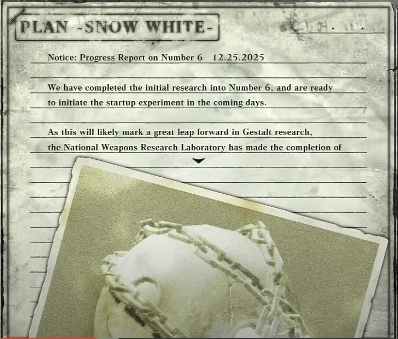 The donor body Halua has been chosen from among the seven candiates subjects to proceed to the next stage. In the interest of protecting state secrets, all but one of the remaining subjects will be disposed of. The donor body, Emil, however, will be kept in storage as a failsafe measure. 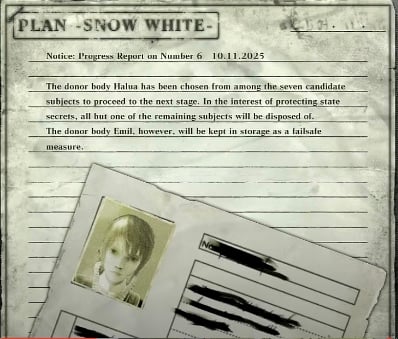