How do you obtain Sealed Verses?

You can begin to obtain Sealed Verses once you progress in the game and are introduced to Grimoire Weiss in the Lost Shrine. You will then obtain your first Sealed Verse during Combat. The rest of the Sealed Verses are attained as the storyline progresses, usually during or after completing a boss Fight Sequence. They will be found in your menu under "Magic/Abilties." You will be able to swap them into your controls, two at a time. More can be bound to different keys if forgoing another martial art ability.

How do you upgrade a Sealed Verse?

They are usually leveled up as your main character,  NieR, levels up in game. You will then be able to charge up the attack to create larger and more damaging effects.

On the Playstation, L1 / L1 are used to cast your Sealed Verses. Each one drains a varying level of MP shown on the blue meter below the HP meter.  Typically. you would have only two Sealed Verses equipped at a time to alternate during battle. Up to four can be equipped if you are willing to forgo other action controls like your evade roll or block. The MP meter restores itself gradually over time, but can be accelerated when hitting magic projectiles with melee attacks. 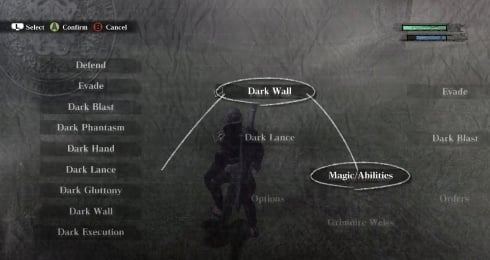 The first type of Sealed Verse NieR will obtain. It shoots out an array of small bursts of magic

Sends out a giant magic hand from the Grimoire that crushes enemies in its path, and can be charged to pack a more powerful punch

Creates a large blast of energy sending out a doppelganger NieR, striking enemies within a radial range

The ability to absorb surrounding energy and projectile red orbs to manifest it into a larger energy ball and project it in one direction.

A defense power that creates a large circular barrier wall. It blocks out projectiles and can be charged to completely wrap around NieR

Summons out a streak of spears from the ground in a linear direction that pierces opponents. The effect can be multiplied to create more spears

-Popola, speaking about the Song of the Ancients

Scroll from the Song of the Ancients