What is NieR: Replicant?

NieR Replicant is an action role-playing video game, andthe upgraded prequel of  NieR: Automata. The remake that is better known as "NieR Replicant ver.1.22474487139…" is an updated and globally released version of NieR Replicant, which was released in 2010 only in Japan.

Players take on the role of the Protagonist, who is a kind young man living in a remote village. Journey with him as he sets forth on a quest to find a cure for his sister, Yonah who has fallen ill to the Black Scrawl disease.

When is the release date?

The revamp is produced by developers Toylogic and Square Enix, with the original all-star team of the NieR series - acclaimed director Yoko Taro, composer Keiichi Okabe, and producer Yosuke Saito.

A separate DLC for NieR Replicant ver1.2247... have yet to be announced.

However, a paid DLC for the previous NieR Replicant and its western version, NieR Gestalt, is available. Known as the World of Recycled Vessel(or sometimes listed as 15 Nightmares), it features an extra hour of fighting gameplay with three mission packs and a new species of shades. It will also reward you with 10,000 experience points, two costume changes, three new weapons, and 50,000 gold.

Any other extra contents available for NieR Replicant ver1.2247... ?

A special edition of the game known as The White Snow edition is available for pre-orders. It comes with extra perks and merch, including: 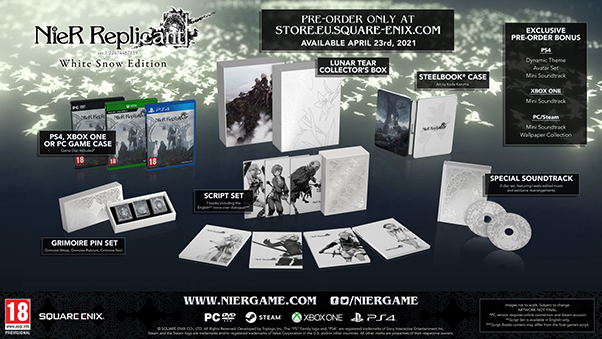 What are the Pre-order bonuses?

NieR Replicant ver1.2247... is available for pre-order now, and comes with several pre-order bonuses. One of which, a set of mini soundtrack featuring three in-game songs, is available across all platforms. Additionally, PC players will receive a wallpaper collection and avatar set, and the Playstation 4 players will receive a dynamic theme and avatar set.