The Protagonist is the main playable character in NieR Replicant. The Protagonist is a skilled warrior who can wield various weapons such as Light Swords, Heavy Swords, as well as Lances, and Spears. He is mainly accompanied by Grimoire Weiss and is on a quest to find a cure for the illness of his sister, Yonah.

The protagonist of this story. His calm expression conceals a darkness underneath, but he cares deeply for his only blood relative, Yonah. The protagonist sets out to find a cure for his sister's illness, but because he puts his sister above even himself, he tends to speak and behave recklessly.

Nier is the main character of NieR Replicant. It centers around him desperately looking to cure his sister, Yonah’s, fatal disease called the Black Scrawl. He lives with her and does small tasks around their village to make money and care for his sister. He is later accompanied and assisted by the mysterious white book, Grimoire Weiss.

Upon hearing the Song of the Ancients, he puts his faith in its words and he sets out to collect the Sealed Verses so that hopefully Grimoire Weiss could help his sister rid her of her disease.

With the assistance of Grimoire Weiss, he learns and utilizes its magic to defeat shades along the way. Throughout his journey, he also makes new companions along the way. A half-human, half-shade called Kainé and a young boy with the ability to turn whomever he gazes upon his eyes to stone. Together, they continue the quest to complete the Sealed Verses, even through many hardships. He witnesses his own friend, Kaine, become petrified in order to seal a deadly Shade beneath the library, and Yonah get carried away by the master Shade, Shadowlord too.

After all the troubles and hardships, years later, he is still determined to find his sister. Time goes by and the village goes through wears and troubles of its own. Shades have developed and even NieR himself has a hard time against them. The village is run down, and shut away, and is in short supply of resources.  When Emil discovers that he might have the solution to his own curse and how to undo petrifying Kainé. On their journey, it seems that Emil starts to remember some details of his past- that he was part of a series of experiments made to be turned into a weapon. NieR continues to assure him that he is just Emil, and whatever is in his past does not matter.

When they manage to free Kainé, NieR offers her a gift-  a handmade Lunar Tear like her grandmother used to make. Popola later then informs them that the villagers are becoming wary of Kainé and Emil's presence. They both offer to sleep outside despite NieR's objections. After everything, he remains loyal and thoughtful to his friends. He even calls himself selfish and blames himself for not considering Kainé and Emil enough. When he expressed his anger towards Popola for relaying him the news, he came back to apologize. Events like these show NieR's true persevering noble and thoughtful character.

He also remains persistent and focuses on his main goal to now locate the Shadowlord and take back his sister. He continues to insist that she must be alive. In the end, he holds onto the same values and beliefs. He is the type of character who is persistent and determined throughout and does not stop until the end goal is reached.

NieR has a set of basic combat skill maneuvers such as attack, defend and, an evasive roll for evading (R2), and basic melee light and heavy attacks. He always has a melee weapon equipped that is either a one-handed sword or dagger, two-handed sword, or a spear. These melee attacks can be chained together or used in a combination with his jump to create a jump attack or a combination of his defense move plus attack to do a counter-attack. Holding down the button can also charge his attacks, which vary according to the weapon you have equipped. He also has a shoulder charge, which will be helpful for clearing for NieR when he's surrounded.

Nier's more powerful combat abilities derive from the assistance of his companion white book, Grimoire Weiss. As the story progress, they set out to find the eight Sealed Verses, each granting powerful magic. In order of progression:

NieR is also able to level up as he progresses. Some of the Sealed Verses will also adapt to NieR's level and upgrade along with NieR. Individual weapons are also available for upgrade. 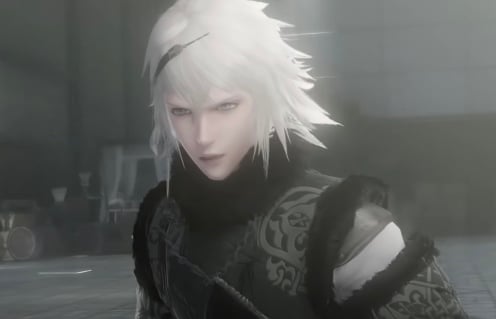 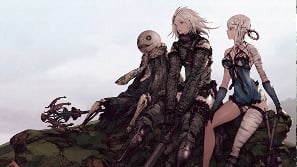 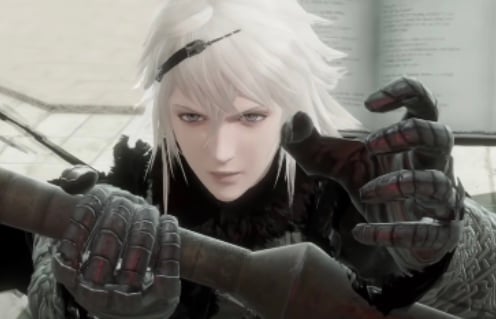