Facade is a location in NieR Replicant. It is a grand desert city built on its many rules. It is run by the King of Facade and home of the Masked People.

Facade Map can be bought from the Item Shopkeeper at Facade for 500 gold.

Rules do not exist to bind you, they exist so you may know your freedoms

The Map of Facade can be bought from the Item Shop in Facade for 500 gold after NieR has progressed to Facade in the storyline. 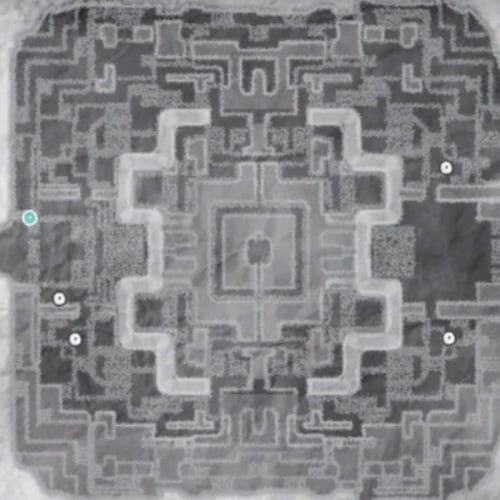 Facade is accessed from the Village through the Eastern gates toward the Eastern Road. Head south towards the Desert. Get through the desert, and NieR will eventually reach the grand entrance of Facade. Beware of the wolves on the way

Facade is a city surrounded by deserts and Wolves. The residents of the city are called the Masked People and are protected by the King's Soldiers called the Men of the Mask. They are led by the King of Facade. NieR makes his way here when Kainé mentions a city to the east that has been conducting research on the Black Scrawl since their King had also fallen ill to the disease.

Facade is a city built on its thousands of rules. Its residents know all their rules by heart and are devoted to keeping to them. To outsiders, the rules might seem quite trivial, but the residents do not question them. One obvious one is that the residents must always be masked. The rules can be as trivial as running errands a particular way or being unable to step into the Barren Temple despite their Prince going missing.

Fortunately, visitors are not bound by the rules, even though the locals swear by them and insist that the rules do not exist to bind them but to know their freedoms.

During NieR's first visit, he could only communicate with one young voiceless Masked Person, a girl named Fyra. She tours NieR around the town until disrupted by the soldiers in panic informing them that the prince has gone missing in the Barren Temple.

Because of the rules, NieR is the only one permitted to enter and look for him.

They also found out that Kainé is a known welcomed guest here because of her previous run-in with some residents of the city. She had managed to save the lives of one of the children, who they later find out was Fyra, who was enthralled to see her again.

NieR is invited back to Facade to witness the King of Facade's wedding. However, the celebration was cut short by an intruding pack of wolves who unfortunately took the life of the Queen. The King sought out revenge with the help of NieR, taking their fight directly to the den of the wolves in the desert.