Emil's Manor is a location in NieR Replicant. It is where NieR initially meets Emil and encounters the Grimoire Rubrum in the mansion's library.

The Manor Map will be obtained from Emil in the Manor when NieR meets him. He will also give NieR the Star Key. 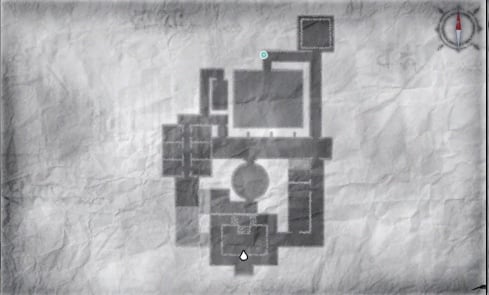 Emil's Manor is accessible from the Village through the Southern Gates, and across the Southern Plains before Seafront.

Surrounding the area will be a large Shade, and some poisonous enemies as well. Emil's Manor will be just past the large metal gates.

Emil's Manor is the mansion atop a hill south of the Village where Emil and his butler reside. It is also referred to as Emil's Mansion or the Haunted Mansion, as Grimoire Weiss suspects. The mansion's environment mostly remains black and white to represent time standing still as Emil and his butler do not age. The butler is even described to be statue-like and scares Grimoire Weiss during their exploration of the Manor.

The interior of the manor is far from free of Shades, as NieR will also have to fight through a few hordes to get through the halls of the Mansion. The several doors are also locked and keys can be found to unlock different doors.

NieR will later encounter Grimoire Rumbrum in the manor's library as well.

When NieR returns after Emils summons him again. They will both discover the Underground Laboratory beneath the manor for weapon experiments. Documents will state that the Mansion was built on top as a disguise.

Players can find the following Weapons:

Emil's Manor is first mentioned when NieR hears of Yonah's new penpal who needs help from the big house down south. Their first visit to the Manor requires NieR to clear Shades in rooms and hallways and unlock doors that eventually lead to the encounter with Grimoire Rubrum at the manor library, and receive a Sealed Verse upon its defeat.

Upon NieR's return to the Manor in Act II, They will discover the cure to petrification somewhere beneath in the Underground Laboratory.

Sebastian, the Butler, tasks NieR with helping out with some research whenever he visits the Manor as well