The Barren Temple Map can be obtained from Fyra, just before entering the temple. 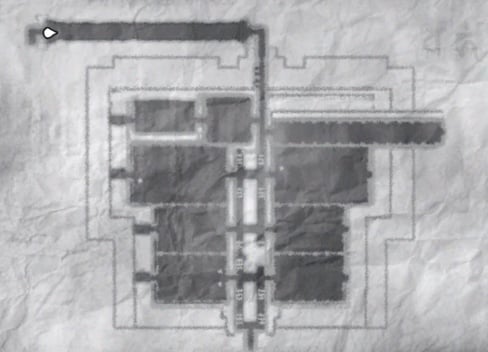 Barren Temple is accessed from Facade, north through the desert. The route to the temple will be blocked by a sandstorm until the time comes where NieR is tasked to enter to look for the prince.

The Barren Temple is a sacred place, also bound by a number of rules like Facade. According to the rules, only royals can step foot in it, but this does not apply to NieR since he is a visitor. Each room in the temple also holds its own individual trials and prohibiting rules, such as "no jumping" or "no standing still," but they will be presented as a title that the player must make sense of themselves.

Breaking the rules will result in being escorted out by the large temple stone cubes. When a player breaks the rules, the room will simply reset. Being hit by an orb will also result in a reset.

The objective of each room is to reach the light stone and break it while evading the orbs and still keeping to the rules. The last puzzle room is also infested with Shades and the final chamber will be protected by Shahriyar, a guardian built from the cubes of the temple. Each room and trial must be cleared before the force field is lifted to reach the bridge to the boss chamber.

There will be a save point mailbox at the end of the long outdoor bridge through the large doors before the final boss chamber.

Since NieR is the only visitor capable of entering the temple without breaking any rules, the Men of the Mask tasks NieR to fetch their missing prince. With the many rules set in place and Kainé's lack of patience, it's no surprise that she was unable to keep to the rules and is escorted out of the room leaving NieR and Grimoire Weiss to face the trials on their own. When the prince is first seen, he himself is escorted out of the room, assuming he also broke one of the many rules.

The trip to the Barren Temple ends with the boss fight with Shahriyar, and they are rejoined by Kainé.

Defeating the boss will release the prince and unite him with his initial objective- retrieving the Royal Mask.

There will only be a few times NieR might need to return to the temple. Some side quests would task NieR to enter to clear out some bandits and Shades.

Get to the other side of the room without jumping. Push and pull the dark blocks to block out the path of the projectile orbs, and clear a path for NieR to reach the glowing block. Break the block to proceed. Enter through another set of unlocked doors.

This is where NieR will first see the Prince. It appears he has broken a rule of the room. One of the temple blocks will escort him out, and NieR will have to find him again.

Run through the room without stopping. Run in circles if you have to. Wait for the breaks in between projectiles. There will be an opening for NieR to run across. Break the glowing block. Continue through the next doors and jump down on the sinking block platforms to get to the next room.

This is where Kainé loses her patience and meets the same fate as the prince by breaking the rules.

The temple blocks can be moved around to block the projectile cannons, to clear a path to the other end.  It is also possible to run ahead of the start of the trial as soon as it starts before projectiles start emerging. Break the block to continue.

This room will contain more than one glowing block to break this time. Use Dark Blast or Dark Lance to aim at the glowing blocks and destroys them. Proceed through the next doors. Cross through another set of sinking block platforms. The doors will lead you outside.

This will be the final puzzle room, but this time it is filled with Shades. Clear the Shades without rolling to clear the room. A Large Shade will spawn after clearing the first set of Shades. Exit the chamber and turn to your left. Cross back to the other side on the second long bridge. Enter through the next set of doors and there will be a mailbox save point down the stairs. The next doors will contain a boss fight sequence.

This final room will reveal where the prince is. Shahriyar will stand in your way. Shahriyar is a guardian made up of the temple blocks. He takes up three different forms during his boss fight sequence. The goal is the same as the puzzle rooms. Aim for the glowing temple blocks and destroy them to progress. Use Dark Blast to shoot forward or Dark Lance so you have a crosshair for aiming when the blocks are not within range.